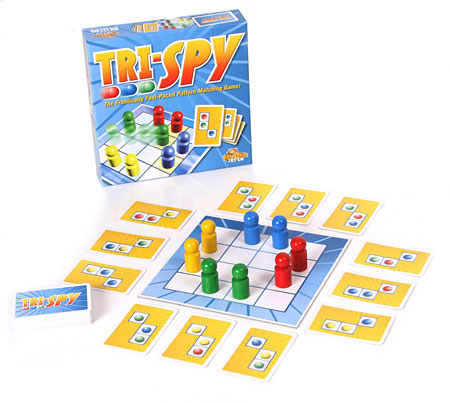 Fat Brain Toy Company’s Tri-Spy is a pattern recognition game that takes a very small board and eight playing pieces and transforms them into a high energy, fast-paced mind-blender set on puree.

Or that’s the impression I got from my fellow players. I’m not too modest to say I rocked this game. And I will continue to rock the game so long as I do not play people like my brother-in-law—those people who play pattern recognition games like they are reading a Dr. Seuss book while I’m slogging through another tome of Dostoyevsky and wondering if I got the translated version or not.

Tri-Spy is very simple which is a criterion that recommends it to Major Fun. The board is a 4×4 grid. There are eight pawns (2 each of green, yellow, red, and blue). These are placed in a start pattern at the edge of the board. The start pattern never changes, but the pawns meander about as play progresses. Finally, there are sixty pattern cards 12 of which are arrayed face up around the board. Each card depicts a pattern of colored pawns that the players are trying to locate. The remaining cards form a draw pile.

Players score points by collecting the pattern cards in one of three ways. Option One: If a player sees a pattern that exists on the board, the player yells STOP, shows the pattern, and collects the card. This is rather rare. Option Two: If the player can make a pattern by moving ONE piece to an empty square, the player may yell STOP, move the piece, show the pattern, and collect the card. This is the most common way to score and results in the pawns migrating across the board like a flock of moths around a chandelier. Option Three: If there are no patterns, the first player to yell DEAD END gets to move two pawns to create a pattern, collect the card, and play resumes. This happened once in our game.

As cards are collected, new ones are drawn from a supply pile. Once the supply pile has been used up, the game is finished and players count the pattern cards they have collected.

The game comes with a great rule variation, called “Dashing,” in which each player has 10 cards face up in front of them. Players try to get rid of their 10 cards by making a pattern match BUT you can mess with your opponents. If you match one of your opponent’s cards, that card is thrown out of the game, your opponent must take one of your cards (as a replacement for the one you matched) AND draw an additional card from the deck. Play continues until one player has no more cards.

Frustration levels can rise rapidly but the satisfaction that comes from grabbing a pattern from someone who has been grabbing up cards every two heartbeats is exquisite. And Major Fun.

So I’ve been told.

Tri-Spy is © 2008 by IQ-Spiele and distributed by Fat Brain Toy Company. Authored by Susanne Galonska and designed by Mary Stadelman.