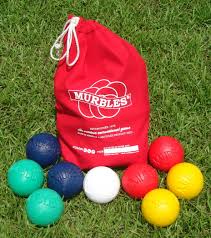 Despite the rather cruel and fickle nature of this particular March, there have been a couple of really pleasant days in which all but the most stubborn or sheltered piles of snow melted away. Spring is in full tease mode. Yesterday I went for a run in shorts and t-shirt. Today I had to push an inch of wet snow off my windshield before I left work.

But those few nice days got me out not just to run but to play a couple games of Murbles that Murray Kramer of Kramer Kreations was nice enough to send to us back in December. Now, Murray is from Pensacola, Florida where I can only assume that a lawn-bowling game like Murbles is a viable year-round proposition. Unfortunately the game reached me in Indianapolis just as we were settling in for what would be one of the snowiest winters on record.

Each set of Murbles comes with a target ball (white) and six other balls in 2 colors. The ones I tossed around the yard were red and blue, but there is a huge variety of colors you can order. As with most bocce-style bowling games, you throw the target murble and then players try to get their murbles closest to the target. With the basic set, two or four people could play by alternating throws. Combine multiple sets and you can have a game for an entire family reunion.

Although the game will be immediately familiar to anyone who has ever thrown objects over a grassy surface, it is the packaging and materials that really make Murbles stand out. The murbles are three inches in diameter, weigh about half a pound (8 ounces), and come in a colorful canvas bag with the rules printed on it. The murbles are small enough and light enough that children and the elderly can play with them, but they still have enough “heft” so that your throws feel controlled. They are made from a dense, recycled plastic that is also buoyant so you won’t lose them at the bottom of a lake (although prevailing winds and waves might lead you on an extended chase).

Murbles is Major Fun that you can throw in your back pack or the back of your car and then throw around in the great outdoors. Something to usher in the spring and a great reason to get outside and (as my mom would say) get the stink blown off.

[sniff] I’m pretty sure I need to get out more.

Murbles was designed by Murray Kramer and is © 2011 by Kramer Kreations.

Major Fun would like some credit for doing this entire review without making one joke about balls. Not one. Read back through there and check out all the opportunities I had. I tell you what, being this mature is really hard difficult.