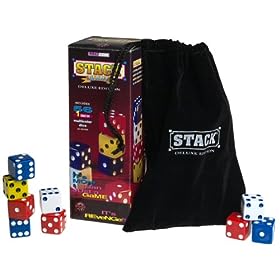 Stack is a strategy game you play with dice. A lot of dice. 14 for each player.

First, you decide on what color you want. Then, you spill all the dice onto the table, and smoosh them around in noisy, and gleeful anticipation. Then you take turns stacking dice (hence the name of the game), one die at a time, on any die other than your own. A stack can be up to four dice high. The die that is on top of the stack determines who gets the points. The higher the number on the top die, the higher the value of the stack.That’s about all you need to know in order to play the game. Except that you can, if so moved, roll a die instead of stacking it. The rest is strategy.

And a very absorbing strategy, in deed. A stack that is three-dice-high is what you might call “attractive.” Especially if it’s a stack of 5s or 6s. Insofar as the next player who has a matching die can claim that stack permanently – or at least until the 15-20 minute game is over and score is calculated. Did I mention that 1s are worth 10? Then there are the two-dice stacks, which will wind up scoring for the player with the top die, unless someone puts another die on top of them, which then makes them a three-dice stack, which, as mentioned above, become dangerously attractive. As the game progresses, and there are fewer and fewer dice to play, the strategy changes accordingly.

For such a simple concept (easy enough for a 6-year-old), the game becomes remarkably deep (more than deep enough for this 61-year-old). And, because you’re all playing together, with this big pile of dice, there’s something about the game that makes you feel more together, as friends and family.

Stack is distributed by Talicor. The set comes with four different colors. Which means that you can have up to four different players. (Talicor offers yet another set with four more different colors. So, if you’re a family of eight, you can still play together.). If you have the wherewithal to buy the deluxe $30, one-inch-dice set, go for it. The big dice add heft and a certain deliciously preparatory noisesomeness. Oh, yeah, there’s even a velvitish bag for storage and transport, which you will probably do, often.