There are three spiders. They have a magnetic personality, despite their apparent spiderness. There are two game boards. One game board is suspended over the other. Two of the spiders (Peter and Parker) live on the top board, the other hangs somewhat menacingly by its web (OK, string) between the two boards. The string is connected to two magnets, and to  Spinderella. Peter connects through the top board to one of the magnets, Parker to the other. Moving the Peter and Parker apart or close together raises or lowers Spinderella. Peter and Parker, depending on where they are positioned, change where Spinderalla hangs. If you can figure it all out, you’ll be able to move Peter and Parker so that Spinderella can get close enough to the ant of your choice (also magnetic), to carry that poor ant back to the starting point. In sum, it’s all about the spiders.

There is some set-up time involved. Fortunately the instructions are well-illustrated and compassionately brief.

Each of up to four players gets three ants. Their goal is to be the first to get all three of their ants across the windy ant-track to the safety of the ant home. All ants share the same starting place and the same home. Kind of sweet, no?

There’s also a tree trunk. It’s hollow – and just big enough to cover an ant and protect it from Spinderella, and tall enough to make any ant who happens to be on top of the tree trunk a very tempting Spinderalla morsel. 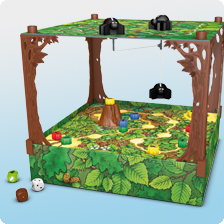 So, you get the general idea. What you can’t quite get from the description is how innovative, and especially how fun the game turns out to be. Getting Spinderalla to move where you what her to be is obviously the most challenging and fun-provoking part of the game, though trying to escape the growing menace of Spinderalla is equally fun. The fact that you all get to move her (if the dice are right), so what appears to be a good move for you at one moment in the game might get you in big trouble (ant-capture-wise) the next move, adds significantly to the joyful angst of it all. Hiding under the tree trunk is very clever, unless you want to move that particular ant.

Designed by Roberto Franco with art by Doris Mathtäus, Spinderella can be purchased from the German manufacturer who claims that it is suitable for children 6 years old and up. It will soon be available in the US from Lion Rampant Imports. 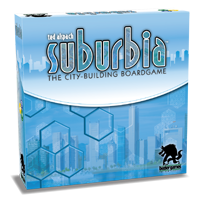 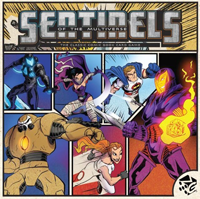