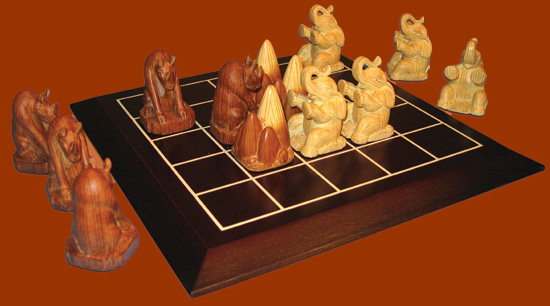 Didier Dhorbait’s abstract strategy game Siam is so beautifully crafted that you will treasure it even before you learn how to play it. Which is a good thing for two reasons: 1) the English translation of the rules is, well, very, shall we say, challenging, in a French kind of way; and 2) the rules are what some may call “unconventional,” requiring you to exercise some conceptual effort before you fully appreciate the cleverness and complexity underlying their comparative simplicity.

Fortunately, Arthur Reilly has written a satisfyingly clear English description of the rules – clear enough to help you through most of your preconceptions to a truly remarkable strategy game – one that you can play in ten minutes with anyone old enough to appreciate a good, abstract game.

One player plays the elephants (and moves first) the other, rhinoceroses.

The game begins with the three mountain pieces in a line in the center of the board. Players take turns doing one of the following: bringing a piece on to the board, taking a piece off the board, reorienting a piece, moving a piece (one space horizontally or vertically, in the direction being faced), or pushing other pieces. The object of the game is to be the first player to push a mountain off the board.

The pushing is where the conventions begin to get un-. If one of your pieces is facing a mountain, it can push the mountain in the direction in which it is facing. If two opposing pieces are facing each other, they cancel each other out. So neither can push or be pushed. If one your opponent’s piece is in line with yours, and you are not facing it, you can get pushed. If two of your opponent’s pieces are facing yours, you can also get pushed, even if you’re facing them. In fact, you can have a whole bunch of your pieces (well, up to 5) in a line, all facing the wrong way, and one of your opponent’s pieces, facing the right way, can push them all.

Then there are the rules about the edges of the board (all important, since that’s where you’re trying to push the mountains off of, as well as where your pieces can get pushed off and where they can be re-entered). Since they surround the board, it means that, unlike chess, checkers and the rest, you’re not playing in any specific direction – a major convention-breaker, chock-full of strategic implications. And the subtle but significant consequences of being able to take pieces off the board and later bring them back into play on some other edge, add yet another chock-fullness to one’s cup of strategic nuance.

(Siam is available in the US via Fred Distribution, and in Europe through Ferti)