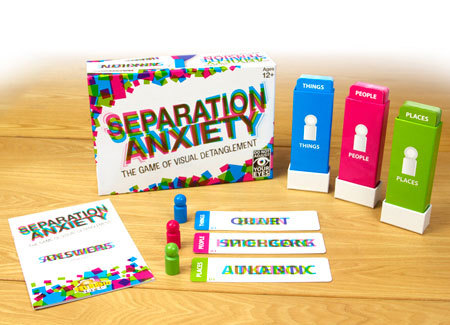 Fat Brain’s Separation Anxiety is won by the person who can identify the one word out of a list of three that doesn’t match the other two.

Sing along with me: “One of these things is not like the other…”

By itself, that’s not much of a game. The clever bit, the part that makes the game Major Fun, is that the three words in the list are mashed together in such a way that it is difficult to identify the individual words. Add the tension of racing against your opponents and you have a game that is very much like the rest on our website: Major Fun.

There are three categories of cards: People, Places, and Things. At the beginning of a round, one card from each category is placed on the table so all players can read them. A token is placed by each category (color coded to match the cards). On each card are three words: a blue word, a green word, and a pink word. The words overlap on a single line so that much of the word is muddled mess that looks like it should be starring in a 3D movie. One of the three words does not match the other two. As soon as you have figured out which one you grab the token that matches the card.

The round ends when all three token have been grabbed. If you grabbed the token, you reveal the words and the relationship. If you got it right then you earn a point. If you got it wrong then you get zero points and earn a good minute or so of mocking from your opponents. The game ends when one player has scored in all three categories.
Most of the relationships are clear once you get the words detangled; however, parsing the words from each other is often quite a challenge. Especially under pressure.

Perhaps the most difficult category for us was the People category. This is the one category where your cultural literacy (or trivial literacy) is put to the test. We found that the younger players could read the names but often had trouble identifying exactly who the people were. For example, we had the list Lombardi, Shula, and Knight. Now, I’m of an age that I could identify all of them as coaches and that Knight was (presumably) Bobby Knight of the IU Hoosier basketball teams of lore while the others were legendary football coaches. Knight doesn’t fit (seems appropriate). This was lost on several of our players.

The game is quick and there was this moment when we decided it was Major Fun because everyone in the room—all 8 of us—were leaning across the table to press our faces as close as we could to the three cards, hands hovering inches from the tokens.