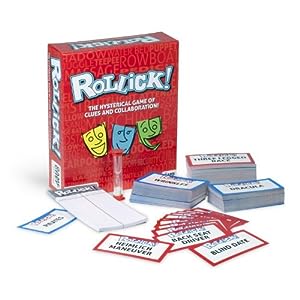 The Game Chef’s variation on charades, Rollick! is Major Fun. By every way with which we have to evaluate a game, it is wildly Major Fun. So why did we not give this game an award when we tried it out last year?

Rollick! is a blast to play. No question. Our games testers loved Rollick! It is also elegantly, economically designed with clear rules, clever variations, and quality materials. And yet, Rollick! is only now receiving a Major Fun award after languishing the better part of a year in our limbo. (To be fair, the Major Fun limbo is well appointed with magazines, couches, a ping-pong table, wi-fi, and some great coffee.)

The brilliance of Rollick! is in its simplicity. It’s a game of charades in which the actor role is given to the group and one player tries to guess the word. This slight change on the rules is brilliant because the acting has always been the most compelling part of charades. A party game where most of the players are up and acting the fool is far superior to the same game where most of the players sit on their butts.

The game comes with 378 double sided clue cards, a score pad, and a sand timer. The sides of the clue cards are color coded to help accommodate younger players (blue side is easier than the red side). Like charades, each team earns points by successfully communicating their words to their guesser without using any sounds. A team gets one pass per round.

Teams that work together have a much better chance of communicating their words. Take the clue “Wizard of Oz” for example. 4 people skipping arm in arm is pretty powerful and better than everyone trying to act out their favorite character. There is also less need for the standard charade short-hand such as the “sounds like” or “second syllable” gestures.

One funny side effect of the game is that the actors tend to move closer and closer to the guesser so that the poor player has to cringe away from the most zealous actors. Establishing a minimum-safe-distance line is probably a good idea.

Now some of you might have a strong feeling of déjà vu right about now. You may feel compelled to scroll back through the Major Fun archives, convinced you have read a similar review. And you’d be right. Reverse Charades received the Major Fun award in January of 2011 and was named a Keeper in November of that year. The games are virtually identical down to their release dates.

So why the delay for a Rollick! review?

Timing is part of the answer. We received a copy of Rollick! after we published the review for Reverse Charades. We loved Reverse Charades and here was an exact duplicate. This poses a problem for a reviewer. It seemed there was nothing new to say about Rollick! and reviewers need something to say. We try very hard to provide our readers with the spice of the gaming life. There was a lot of debate, but in the end we decided that part of the value of the Major Fun award came from our advocacy of variety and originality. Rollick! missed out on a Major Fun award in part because it arrived at an awkward time.

But timing is only part of the reason for the delay, and hardly the end of the story. I’ll be writing more on this later. Stay tuned.

Rollick! by Brent Peterson and Stephanie Zundel. © 2010 by The Game Chef.