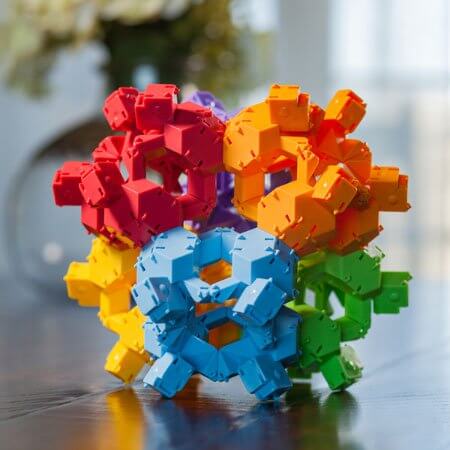 And then you find, in the bottom of the box, a colorful booklet. A puzzle booklet, apparently. You open the booklet to the first page and read about “basic moves” called “translations, reflections, rotations, glide reflections, and glide rotations.” Which makes you once again hum inwardly. “Hmmm,” you hum.

And then you open to the next colorful page and the next, and you read about “2-Fold Mirror Symmetries,” and “4th Order Rotational Symmetries,” and “Truncated Octrahedron,” and “Lesser Rhombicuboctahedron.” And, humming a tad more inwardly, you close your colorful puzzle booklet and start playing around with your collection almost cute cubist turtles. And you discover that you can snap them together so they look like one is riding on top of the other, or two are standing on their hind legs and holding hands and kissing, or two are leaning against each other side-to-side, each standing on two feet.

And “ah” you say to yourself, and again “ah.” And you stick more of them together, in different ways, and you discover that you can stick a whole bunch of them together, and they make, well, shapes. And so you open the colorful puzzle booklet again, and, “ah,” you say, and “oh,” and you lose yourself entirely in the joyous complexity of it all.

They say on the box that Reptangles is for kids 6 and older. Probably because you need to be that strong just to stick Reptangles together and pull Reptangles apart. And, at 6, the whole turtle thing with the dancing and the kissing and the riding will make you laugh and you’ll make plays and stories and turtly dramatizations. And though you might not really get into the puzzle part, you’ll start making your own puzzles, just playing with them.

What they don’t say on the box is that your older sister, the one who’s studying architecture, and your LEGO-playing brother will both probably do the same thing, and so will your parents, probably. And they’ll get as fascinated as you did, only in a different way. They’ll probably go so far as to open the puzzle booklet and try to figure out how to make each and every one of the at least hundred puzzles, and they’ll start inventing even more, like you did, and exploring even more deeply, also like you did, and though they might not say much, you’ll probably hear them humming. “Hmmmm,” they’ll be humming to themselves, while thinking “only one known solution to make a Cubooctahedron? Only one?”

Reptangles. Play with them. Puzzle with them. From Fat Brain Toys. Major Fun.