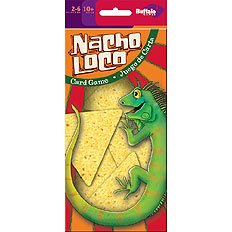 Nacho Loco isn’t exactly a card game, actually. It’s more of a tile game, played with triangles (hence “Nacho”s), made out of cardboard. And yes, it could very well remind you of Triominoes, though it plays more like a, well, card game – a bit like, perhaps, UNO.

You get 94 cards. If they were thick and made of plastic, you’d think of them as tiles. But they’re cardboard. And not thick enough to stand up. Just thick enough to be impossible to shuffle. So you put them face-down on the table, smush them around until they’re satisfyingly mixed, and give 6 cards to each of up to 6 players.

The sections with words say “Skip Next,” or “Go Again,” or “Opponent Draws 3.” If you have an exact match, then either the next player gets skipped, or you get to play again, or you can tell any opponent to draw 3 additional card/tiles.

The object of the game is to get rid of your cards. As soon as someone has played her last card, she gets one point for each card remaining in the other players’ hands. The first player to get 20 points wins. And that’s about that.

Visually, the game is quite appealing. As it progresses, colorful, three-dimensional-like patterns are created. And the back of the cards look like, yes, nachos. Rounds are relatively short, and the game has a fast-enough pace to keep everyone involved for the duration. Easy to learn. Mildly strategic. Fun to play.

Fun for kids as young as 8, the game should appeal equally to everyone in the family. Nacho Loco comes to us from Buffalo Games, makers of the Major FUN award winning iMAgiNiff.