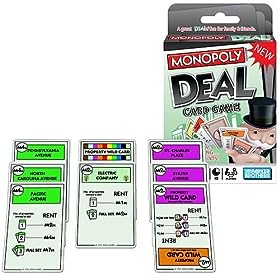 Before I go into too much detail, let me tell you this: Hasbro’s Monopoly Deal is fun. It’s a card game that gives you that Monopoly feeling. You build monopolies and even put houses and hotels on them, and pay for them, in the millions of dollars – all with a deck of cards.

But it’s faster, and shorter, and easier, and at least just as much fun. But a different, shall we say, “flavor” of Monopoly-making-like-fun. Because it’s shorter and easier and faster, you don’t have time to get really invested in the game, you don’t even have to spend time setting it up. And because Monopoly Deal still gives you a lot of the kind of fun of the board game, you take it more lightly. Playing Monopoly Deal is more about fun than winning, more about that Monopoly-kind of, taking-someone-elses’s property-kind of fun in particular, which makes it such a Major FUN family game, par, pretty much excellence.

The rules are simple and clear enough to keep it a good game, good enough to withstand the inevitable creation of many a monopoly-like “house rules” version for many a different age group and be often even more fun. “Quick Start” rule cards handily summarize everything you need to know to play the game. In addition to the Quick Start cards there are Property cards, Money cards, Action Cards, Property Wildcards, and Rent cards – giving your Monopoly Deal deck a nice fat total of 110 cards.

The Money cards are numbered in the millions – 1 Million, 2 Million, 3, 4, 10 Million – just to give the game a more realistically modern financial scale. Action cards include the “Sly Deal” which allows you to steal any property that has not been completed (making property-completion an even more valuable goal) from another player, whereas the Deal Breaker let’s you steal completed properties. The Forced Deal lets you swap any of your less desirable properties with the hugely more desirable properties of your chosen opponent. There’s a Pass Go card, of course, which lets you take 2 extra cards from the draw pile. And on and on – a wonderful complexity of luck and strategic potential, explaned in detail on each card.

Easy to learn. Fifteen, maybe 20 minutes to play a round – just short enough to make you want to play again and again. Simple enough for children of gin-playing age. Complex enough for adults of gin-drinking age. All in all a remarkably effective and significantly fun translation of a very long, often agozingly complex family board game into a comparatively brief, frequently delightful, easy to learn family card game.