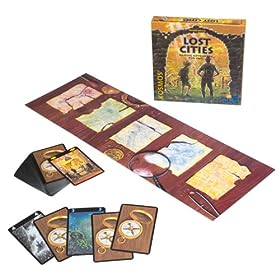 Lost Cities, published by Rio Grande Games, is an elegant two-player card game – easy to learn, a few, simple rules, and yet chock full of subtle strategic considerations. It’s one of the games that helped establish Reiner Knizia’s reputation as a grand master of game design.

The deck (well-illustrated, oversized “expedition” cards) consists of 5 suits, each suit a different color. Cards in a suit are numbered from 2-10. There are 15 “investment” cards, 3 for each color.

Placing the board between you, you build any of 5 different expeditions – cards of the same color, in ascending order. On your turn, you can add a card to any of your expeditions, start a new expedition, or discard onto the corresponding space on the board.

Each expedition you start costs you 20 points (a significant strategic wrinkle of the “don’t start anything you can’t finish” ilk). Each card you play on a destination adds that amount of points (2 to 10) to the total for that expedition. Since you must play the cards in ascending order, if the first card you play is a 10, that becomes your total earnings for that expedition, so you lose 10 points. Here we have yet another wrinkle – the lower ranking cards being strategically more valuable in the beginning of the game as you build up towards the higher. Unless you’ve played an investment card first. Which doubles your loss or gain. Since there are three investment cards for every expedition, if you play all three investment cards first, you stand a chance to increase your gain or loss by a multiple of four. On the other hand, if you manage to collect all 9 cards (2-10), and you had the foresight and fortune to also get all three investment cards, you could, conceivably, earn more than 250 points for a single expedition (less the 20 for investment costs). Note the term “conceivably.”

Though luck plays a definite role, each turn is corrugated with strategic wrinkles. The first few turns are the most provoking, thought-wise. As the game continues, the choices are fewer, and the pace quickens – adding a lovely sense of semi-breathless anticipation as the game draws to its inevitable conclusion.

The round ends as soon as you run out of cards from the draw pile. You can delay that inevitability by picking cards from the discard piles that accumulate on the board. But only for so long. Thus, yet another wrinkle, strategically-speaking. A full game takes three rounds. And the whole thing can be played in under a half-hour.

You know how in all other card games you pick first and then throw? Well, in Lost Cities you do the opposite. And therein, believe it or not, lies a significant portion of the delight and the agony of the game. (Agony in the best sense, as in the Greek, agon – “the conflict on which a literary work turns.”) There you are, with a white 5 on the board, a 7 and 10 in your hand. You don’t want to play the 10 because that will be the end of that expedition. So you throw the 7. And you pick. And there’s that 6. O, the sheer injustice of it all! And the Major FUN-itude!

There is definitely a strong element of luck in this game. But not the fault-mitigating kind of luck that you sometimes some desperately hope for. You lose, it’s probably because you could have played better. Thus it is recommended for the more mature player, who can better deal with the onus of having to think while in the steely grip of the ineffabilities of fate – that puts you at fifth grade, at least.

The game has been around for a while (originally published by Kosmos in 1999). You can even play online.