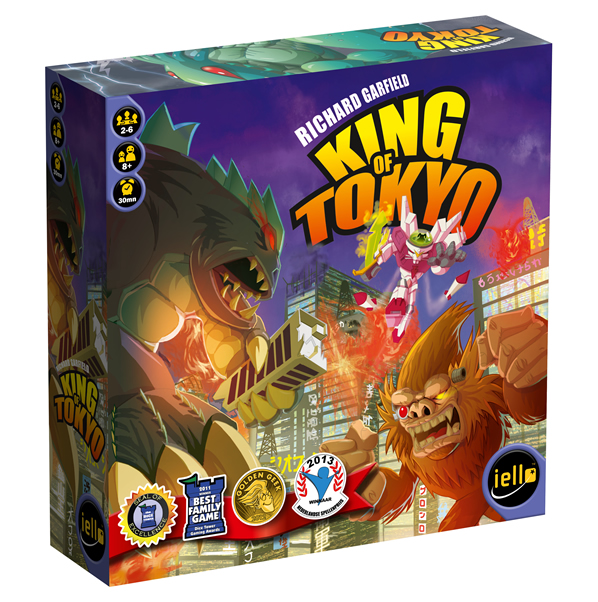 When you are a giant radio-isotope powered monster life is generally pretty simple. You find a city. You enter the city. You smash the city. The humans, like scurrying termites, are clever and industrious but are mainly a fine garnish.

Really the only thing that can ruin a perfectly pleasant rampage is another giant monster.

Iello’s King of Tokyo drops you into a slugfest between some of the world’s biggest, baddest behemoths as they battle it out for control of the planet’s most colorful prize: Tokyo.

Each player controls a giga-monster in a king of the hill type battle for Tokyo. Your monster becomes the king of Tokyo if you destroy all the other monsters OR if you earn 20 victory points. The game is played by rolling 6 dice and keeping the best result—yahtzee style. The result you keep allows you to do different things: attack other monsters, heal yourself, gather power cubes, and gain victory points. Most of these actions are self-explanatory. The power cubes allow you to buy special cards for your monster. These cards give your monster all kinds of advantages—some of which are used only once and others which can last through the entire game.

Once a monster takes control of Tokyo, all other monsters attack that monster until it is defeated, runs away, or wins. If the monster in Tokyo runs away when it is attacked then it gives up its spot to the attacking monster. That new monster must now defend itself against all the others. It is possible to win without being in Tokyo. Some dice give you victory points as do some of the special cards. But taking Tokyo and staying in Tokyo are also good ways to earn victory points. It’s also a good way to hurt all the other monsters.

The art work is fantastic and the monster boards are clever. Each player has a monster board that has two wheels. You rotate one wheel to keep track of your monster’s health and one wheel to keep track of victory points. The cards and the boards are colorful and actionful and evoke all the tropes you would expect from the giant monster genre. The rules take up about two pages and much of that is devoted to examples and illustrations of play.

There are a lot of details in the rules that you will learn in your first game. Most of the learning curve comes from reading the special cards and keeping track of the power cubes. Once you get an idea of what the special cards can do for your (or to you) then the rest comes down to a few choices: attack or heal; stay in Tokyo or run away.

Smashing a city with a giant monster has not been so much fun since the video game Rampage!

King of Tokyo was designed by Richard Garfield (whom you might know from a small card game called Magic: The Gathering) and is © 2010 by iello.