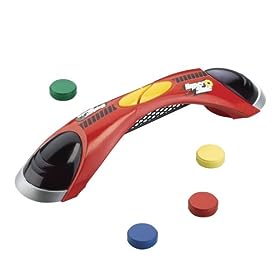 Hyper-Slide, true to its name, involves sliding, and a level of activity which can accurately be described as “hyper.”

There are 4 pucks. Each is a different color. There’s a bridge which serves as a goal, as it were, and sometimes as a net, more-or-less. On top of the bridge are two buttons that light up. Go ahead, press one. Wait. First, put the batteries in. OK, now press one of the two light-up buttons.

The, shall we say, “Hypehost,” filled with youthful, gameshowhost-like enthusiasm, says: “Hyperslide!” Then: “Choose the game you want, then press the button to get started.”

One of the buttons is lit, so you press that one. “1)Fast Pass,” says the Hyperhost, to gameshow-like musical accompaniment, “2) Add One,” it continues, “3) Code Buster 4) Fast Pass Head to Head 5) Add One Head to Head.” So you hit the blinking button.

“Fast Pass. The All Time Score is 52 Passes. Red begins.” Says the Hyperhost.

And then you realize that you really need two people to play. Unless maybe you install that “Cyber-rubber-band”ish thing across the goal.

The fun of each of the 4 games is greatly enhanced by the voice, musical timing, ability to know which of 4 pucks you slide through it, or don’t, and very long memory of the Hyperhost.

Given only two flashing buttons and 4 different-colored pucks, a Hyperhost with a good sense of timing, like the one in Cyber-Slide, can put the proverbial partridge back into your conceptual pear tree.

This Hyperhost leads you in at least three games. Or five. Or ten. Depending on what you play and how you play them and how many people play – from one to probably four.

Fast Pass: slide the color puck the Hyperhost tells you to, and only that color puck, in maybe 90 seconds, as often as you can while the music gets faster and so does the Cyberhost.

Add One: like the game of Simon, you have to slide an ever increasing repeating series of pucks, puck-by-puck.

Code Buster – slide whatever works until you happen to slide the right ones across the goal. try to do it faster next time.

Add One – Head to Head: Also Hyperbandlessly, Add One – for also 2. Or 4 especially even. Though playing by yourself is also fun, even.

Self-storing, with an almost intuitive game design, Hyper-Slide provides for many different levels of physical and cognitive challenge, featuring clear, but mild-mannered Hyperhost that acknowledges your success without rubbing your face in your failures. All-in-all, Hyper-Slide is Major FUN. For the whole actual family.