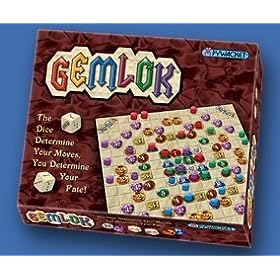 Gemlok, from Pywacket Games is a board game for 2-4 players combining chance and strategy in some rather delicious ways.

The object of the game is to score points by occupying high value spaces on the board. To do so, you move your playing pieces according to movement patterns determined by the throw of a unique pair of dice. You begin the game by positioning your 8 pawns on 8 of the 14 spaces along one of the edges of the board. Printed on the board is a large array of gems of different value. The gems in the center of the board are of the highest value, thus attracting much of the action of the game.

If you manage to land on a space occupied by another pawn (your own, your partner’s, or your opponent’s), you can “bump” that pawn up to three squares in any direction. Though you might feel it more important to bump your opponent off of a high-scoring gem-square, you would be wise to consider the possibility of opportunities for you to bump one of your pawns on to a higher-scoring space.

The word “Gemlok” is printed on the sixth side on each of the dice. This allows you to make the placement of any one of your pawns permanent, which, with all that bumping going on, often turns out to be highly desirable.

Gemlok has relatively few rules, and takes maybe a half-hour to play. But it is an intensely absorbing half-hour, one that you’ll probably want to repeat several times before game time ends. Though dice are used, Gemlok is much more a game of strategy than chance.

Recommended for 2-4 children as young as 7 and grown-ups who can stand losing to them, Gemlok should prove as successful as a family game as it is worthy of somewhat serious adult consideration.