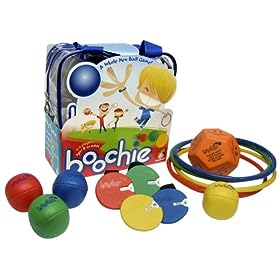 Boochie, by Gamewright Games, is an obvious play and variation on the popular game Bocce. But while Bocce can become an intense affair, especially for adults, Boochie is more of a silly, fun game for the family. Really – can you even say “Boochie” without smiling? Additionally, the Boochie ball itself is not a sphere, but a foam dodecahedron that bounces in odd directions and feels like one of those items that every household should have.

To play the game, each player takes a large plastic ring and beanbag ball of their color, placing a matching scoring device on their wrist. One player tosses the Boochie ball a distance away, and then players take turns throwing their beanbag balls and/or rings towards it. The player who has the closest object scores two points, and the player with the second closest object receives one point. Players also score points for “ringing” another player’s bean bag or the Boochie ball itself. Finally, the Boochie ball lists another requirement (“+2 for the players with hoops closest together”, “+1 for the object farthest away”, etc.) that gives out bonus points. Players mark their points on the dial, which is on their wrist, and begin another round.

But that’s where things become deliciously interesting. As players gain points, they suddenly have to toss the ball in strange and unusual ways. One player may be forced to make loud noises as they throw, while another must toss objects backwards, between their legs. This accomplishes two things – it increases the silliness (and therefore, fun) factor of the game, while it allows players who are behind to catch up. The more points a player has; the more difficult their throw is.

And therein lies the joy of the game, as families with a wide range of players can effectively play a fairly competitive game and remain close in competition. Little Johnny may throw his ring in a completely different direction and yet gain a point for being the farthest away. Young Tisha might laugh at Dad, as he has to jump while throwing, which results in hilarious contortions. Boochie is simply a fun, entertaining game that can be played outdoors or in large, open rooms. The fact that any group of four players can play this game designed by Forrest-Pruzan Creative means that it is Major FUN. Boochie Boochie Boochie Boochie. See, I told you it was fun to say!