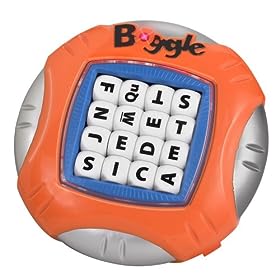 The classic word game Boggle (click to play online) has been repackaged. The game is the same, but it now comes in a sealed plastic case. You twist the case, expanding the cavity that holds the letter dice. You shake the case to make the letter dice change position. You twist the case the other way, the dice all snuggle into their new position, and the timer starts. All you need is paper and pencil. Everything else (even the battery) is included in one handy package (click on the demo tab to see how it works). So there’s nothing to lose – except the game.

There’s nothing new about the way the game is played, but the new package of this clearly Major FUN game is innovative enough to be worthy of our collective attention. Yes, it’s convenient, and could easily be classified as a “travel” game. But because there are no loose parts at all, it’s something more.

Of late, I’ve been holding many of my Games Tastings at the Irvington Library in Indianapolis. In addition to the Tastings, I’ve been donating some of our award-winning games to the library so we can start a small collection. The challenge, as you can imagine, is dealing with all the small parts. It takes a lot of dedication to make sure that a game comes back completely in tact. Boggle’s new packaging solves that problem beautifully. So exemplary is its design, that it has led me to create a new award category. For want of a better term (I was thinking of Ludotheque, which is French for public libraries devoted to games and play – why France, why don’t we have them everyhere, you might ask?), I decided to use “library.” It could mean school library, public library, club library, senior center library, even your own personal games library. But the point is, Hasbro has done something exemplary with its new rendition of Boggle – something that makes the game that much more accessible, especially to institutional environments, and hence, that much more worthy of appreciation and recognition.