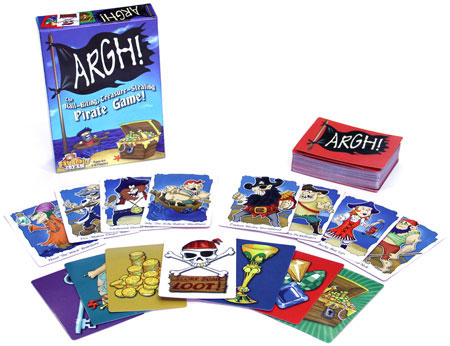 I’ve mentioned before how Go Fish is one of those games that kids of a certain age find irresistible and adults often equate with that sound an amplifier makes when you walk up to it with the microphone. But small changes make big differences and ARGH! Uses the Go Fish mechanic to create an engaging press-your-luck game. Players collect treasure cards that are spread face down on the table. On your turn you draw until you decide to stop OR you find one of the 8 pirates (in which case you lose all your cards). If you stop before a pirate you can score sets of three or more.

Special cards keep things interesting. Treasure chests are worth 3 points all by themselves. LOOT cards allow you to steal treasure cards from your opponents. And that’s it. When the 8 pirates are all discovered then all cards not face up in front of a player are shuffled and spread out on the table. Play goes until someone reaches 40 points. Games are quick and get very tense as the number of revealed pirates approaches 8. Players take more risks when there are fewer pirates in the game.

Pirates (like zombies and ninjas) prove once again to be the chocolate of gaming tropes. They usually make most everything a little bit better. In this case, Go Fish becomes MARRRR-velous ARGH!