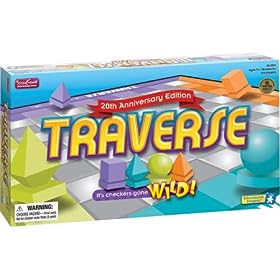 Like chess, there are different kinds of pieces, each with its own way of moving. Like Chinese Checkers (which, actually, is itself a variation of a 4-sided game called “Halma“), it’s a racing game, the object being to be the first player to get all 8 pieces to the opposite side of the playing board. No capturing, no killing, just moving and jumping and racing to be the first.

Again, like in Chinese Checkers, the flow of the game changes as it progresses. As more pieces are moved towards the center of the board, things get crowded, and the possibilities for making multiple jumps increase. And, as they say, how fun is that? So much fun that players often find themselves so excited by the possibility of a really, significantly multiple jump that they forget that they’re supposed to be racing to get their pieces to the other side of the board.

And yet, it’s not Chinese Checkers. It’s Traverse. And the pieces don’t all move the same way. Not at all. One kind of piece can only move orthogonally (the cube-shaped piece), another only diagonally (the diamond shape), another, the triangle-shaped piece, moves diagonally forward, but orthogonally back. And the fourth, the sphere, moves any direction. This means that there’s an additional strategic implication to where each piece is placed – relative to the board, relative to other pieces. And if yet further strategic implications are needed, there’s the additional wrinkle of how you set up your pieces at the beginning of the game. Since they can be placed in any order (as long as they are on your home row), how you arrange your pieces in the beginning of the game can affect your strategy for the rest. Thus, each time you play, the game takes on a slightly different wrinkle.

Traverse can be played by 2 to 4 players. With 3 players, one player gets less-encumbered access to the goal row, so the other 2 have to cooperate against that player while competing with each other. Each combination leads to a different enough game that you are most definitely going to want to try all 3 possibilities (2, 3 and 4 players).

Despite the strategic complexity of the game, it is easy enough for a 7-year-old to play. The design of the pieces (sphere, cube, diamond and triangle) are of great value in helping the players to remember how each moves.