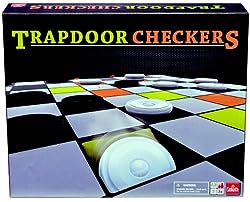 Trapdoor Checkers gives us a new board for an old board game.

Flanking both sides of the board are controls for 4 different slides. Each slide opens or closes one of two trap doors (as the name of the game implies). Which slide you can use, and when, is determined by spinning one of two cylinders embedded on either end the board. When spun, the cylinders offer their players one of three options: slide either a green or orange lever to its next position, or move a checker. When the lever is moved to the left, a trap door is opened; to the center, the door is closed; and to the right, another trap door is opened. On your move, can only slide the lever to the next position.

Each time a trap door is opened or closed, the board is redefined. Though it seems most satisfying to open a trap door underneath one of your opponent’s pieces (a rather delicious moment, I must say), it is at least equally satisfying to open a trap door so that when your opponent makes the obligatory jump, she jumps over your piece into the pit of vindication. Every open trap door adds an almost palpable sense of peril. Almost, but not really perilous. Just fun. From time-to-time, the kind of fun that makes you laugh. Often, Major FUN.

To get a better idea of the game, watch this marketing video (originally for game vendors) showing how the game is played.

Designed by David Mair, Trapdoor Checkers proves to be easy to learn, especially if you already know how to play checkers. It brings checker-players a welcome opportunity to re-examine their basic understanding of checker strategies. It adds elements of surprise and unpredictability, combined with a certain, highly graphic opportunity for vengeance, that create new levels of fun and engagement, and necessitate the development of new strategies. Almost any variation of checkers can be played on the Trap Door Checkers board (for more variations, see my article Ex Checkers). For anyone old enough to appreciate checkers, Trap Door Checkers is a reason to appreciate checkers even more.