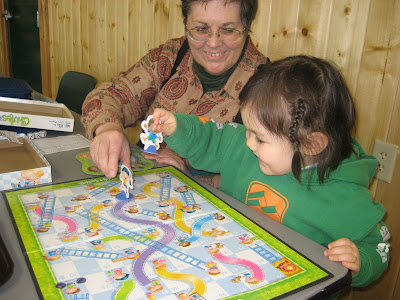 Ya-Ya and granddaughter Esther are playing Chutes and Ladders. There are two problems we older folk have with that particular game: 1) it can get very boring, 2) it can only have one winner. The boring part can be endured. The winner part turns out to be the very opposite of why we want to play in the first place, especially when we’re playing between generations.

Ya-ya and Esther are playing so that they can be together. Just having fun. Just doing something, anything, really, they both can enjoy. Ya-ya is probably enjoying being with Esther a lot more than she is enjoying playing Chutes and Ladders. Ya-ya is probably very bored with the game. Esther will probably cry if she doesn’t win.

They need a variation.

I call my variation the “Anybody’s Piece Variation.” It works like this: “you can move any piece. Whatever piece you move is yours, for that turn.” It’s yours, but it’s not you. You could call it Myrtle or Smunchnik or Pawn. You could even call it You. But it’s not you. It’s just a piece. Nobody’s piece. And all that’s important at the time is who moves it.

Then the game belongs to all of you. And the winning belongs to anyone who wants to claim it. You can make the game as long as you all want to play it. If you want, you can play forever. And nobody has to be bored. And nobody has to lose. And the one who really cares about winning can win if she wants. And you all can focus on enjoying each other, which is what you’re playing for in the first place.

About the photo: I found it on a weblog called Tundra Topics. It was in a post about Ya-Ya’s visit to her Alaskan family. It’s a wonderfully personal website, by the way, giving us a clearly illustrated view of Alaskan living, written by someone who, it just so happens, was born in Indiana, my new home.