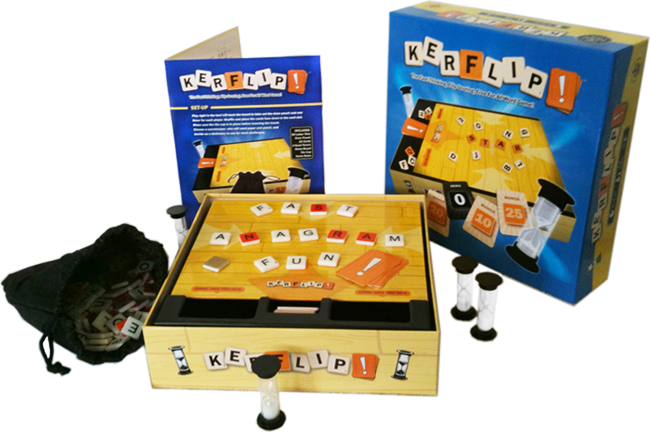 It’s Amigo week this week as we award Haim Shafir and Amigo for several games that we received recently. Although the games have some very similar features (for example they are all games of speed and quick reactions) each one has its own idiosyncrasies and charm. They are all very clever and, more importantly, fun.

Let’s start with a game that is most similar to one we have already given a Major Fun Award to. If you remember from a few weeks back, we loved Finger Twist—another game designed by Shafir and produced by Amigo. Speed Cups has a lot of similarities to Finger Twist. Both are speed games, both involve matching color and order combinations on a card, and both have a bell. Whereas Finger Twist uses colored hair bands, Speed Cups uses colored plastic cups.

Each player has a set of five cups, each of a different color. To start play, a card is flipped over and the players race to arrange their cups to match the pattern on the card. One tricky aspect is that the card does not show cups, instead the card shows a picture of five flowers or five cars or a five-story apartment building. The second wrinkle is that the players must not only match the color order but also the horizontal or vertical orientation of the items. If the items on the card are arranged vertically, the cups must be stacked. If the colors are arranged horizontally then the cups need to form a line on the table.

That’s it. Each player rings the bell when finished. The first player to ring the bell and have the cups in the right order wins the card.

One of the things I found most interesting was how differently each player performed depending on the orientation of the card. I was much better at cards that were vertically oriented. I was competitive when asked to stack the cups. But when it came to horizontal arrangement, I was almost always dead last. Everyone who has played with me has made similar comments. One orientation is much better than the other.

Like all speed games, some people are just better than others. Of the quintilogy of games from Haim Shafir, Speed Cups and Finger Twist are perhaps the most unforgiving in the sense that someone who struggles will get frustrated if forced to always compete against those who are naturally (or in the case of my daughter seemingly preternaturally) dexterous. Then again, pulling out an unexpected win feels really good.

First produced in 1990, this is actually the first of Haim Shafir’s “Bell Quintilogy” of games (“Bell Quintilogy” is not an “official” title. And “Major Fun” knows that some of the “quotes” are misplaced but it’s just so “addictive.”) You can see the DNA of Halli Galli in the more recent games like Speed Cups and Finger Twist, but Halli Galli is more about building tension than raw speed.

The game comes with a bell and 56 cards. The cards depict 1 to 5 pieces of fruit (plums, strawberries, limes, or bananas). These cards are shuffled and dealt face-down to all players. These piles of cards are arranged around the bell.

When play starts, players take turns flipping over one card from their deck so that one card is showing in front of each player. Players continue to flip over cards (covering up the previous card if no one has rung the bell) until exactly five of any fruit are visible. The first to ring the bell when exactly five of a fruit are visible wins ALL of the cards that are face-up on the table. These cards go to the winner’s deck. If a player runs out of cards then that player is eliminated from the game.

If a player makes a mistake, that player must give one card to each of his or her opponents.

The pace of the game is uneven but instead of being a flaw in the game, it turns out to be a major source of excitement. Sometimes you will find yourself ringing the bell every second or third card, but there are times when you can play 10 or 11 cards without revealing a set of five. In those rounds the tension becomes almost unbearable. When the critical card finally drops the explosion of sound and activity is bone jarring.

Even though this is an elimination game, the rounds go very quickly and the amount of down-time is minimal. There are also lots of ways to adjust this game to accommodate for different ages and ability levels.

You might find yourself flinching every time you hear a bell but Haim Shafir and Amigo have provided us with a lot of ways to have fun—Major Fun—while exercising our fast-twitch reflexes.

Speed Cups & Halli Galli were designed by Haim Shafir and © 2013 by Amigo.

Blue Orange Games has thoughtfully provided the world with a dice game that does away with all that tedious waiting around that occurs in games like Yahtzee. In Flash! There is no stately procession of the rolling cup. There are no leisurely conversations while Aunt Maddie hems and haws over which dice she should keep.

The game comes with six sets of dice and six scoring chips (numbered 1 – 6) as well as the rules, a pad of score sheets, and a pencil. Each player gets their own set of dice and the score chips are placed face up in the middle of the table. Similar to Yahtzee, the score sheet has a list of dice combinations that the players try to complete: six-of-a-kind, all odds, all evens, etc. Unlike Yahtzee, with its mannered turns, Flash! has everybody roll at the same time.

For each round, the score keeper chooses one of the combinations and all the players start rolling their dice. When a player completes the combination he or she yells FLASH! and grabs the highest available score chip. the other players keep rolling until all chips have been snagged.

The score keeper records each player’s score and the winner of the round chooses one of the remaining combinations.

To keep things moving, the game has also replaced all of the ones on the dice with flash symbols. These symbols are wild. Once you have a few wilds, most combinations fall into place very quickly. The trick is recognizing the combinations when they happen. Concentration is difficult what with the noise of the dice and the constant yelling that accompanies them. Tension builds very quickly, especially when someone yells Flash!