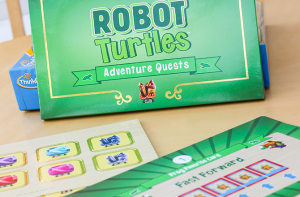 Because Robot Turtles is a programming game, it makes sense that the game will evolve over time. The basic game is already designed with a leveling system in mind and the Adventure Quests  pack builds seamlessly with the original.

Adventure Quests adds a few things to the mix. The game comes with a booklet that contains several board configurations (quests) that the turtles must navigate. There are more gems and there are “Frog Favorite” cards which are sequences of moves that can be “programmed” to the function card. In many ways these are pre-set functions. They can be especially useful if you have children who are having trouble creating their own functions.

What is important is that the young programmers see how commands can be strung together to work efficiently, effectively, and creatively so they will get better at creating their own.

I imagine this game will continue to expand for a long time. There are many obstacles and types of actions yet to be incorporated into the game. Some of this will be created by the individual players, but if the Adventure Quests pack is any indication, I imagine there is a great deal more to come from the developers.

This is a great addition to a great game.

Robot Turtles was designed by Dan Shapiro © 2014 by ThinkFun.