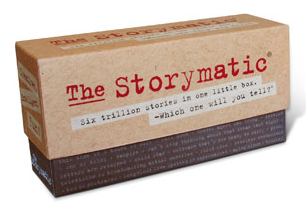 We have the tendency to think of creativity as an expression of freedom and as such we tend to believe that it requires unlimited choice—maybe even anarchy—to fully bloom. In movies we often see the artistic protagonist stifled by too many rules. In these stories the authority figures and the rules become the villains to be overcome so that creativity and free expression can thrive.

Although I believe that a society that feels free to share in a wide variety of artistic visions is indeed a stronger, more vibrant society than one that represses all but a few sanctioned styles I do not believe that creativity itself is helped by freedom. In fact, I’ll go so far as to say that creativity is not a product of freedom but rather a product of limitation. In other words, we are most creative when we are confronted by rules and boundaries.

The Storymatic box comes packed with cards: gold cards and copper cards. The gold cards generally refer to people (amputee, a not-so-good Samaritan, a prisoner of war, etc…) while the copper cards generally refer to places and things and events (first day on the job, plastic flowers, what was left behind, etc…). At its simplest form, the game of Storymatic requires that you draw two gold cards and two copper cards. Combine the two gold cards to make your character. The copper cards must be an important part of your character’s story. The deck of cards has now placed some limits on you and it is up to your creativity to make something beautiful.

There are two other rules that you have to observe: your character must change over the course of the story (without change there is no story) and you cannot kill your main character (it might certainly be a change but that leaves few places to go). Now write.

If you’d like some more variety to the challenge then The Storymatic includes several other ideas of how to play. Some of these they suggest for actors who want to work on improv but all the exercises give any creative person new ways to think about characters and conflict. Want to play with a big group of friends? Storymatic suggests a party game variation that based on the classic exquisite corpse.

Thinking outside the box is the heart of creativity. But it does require a box. Fortunately, The Storymatic provides a great one that encourages you to break out in Major Fun ways.