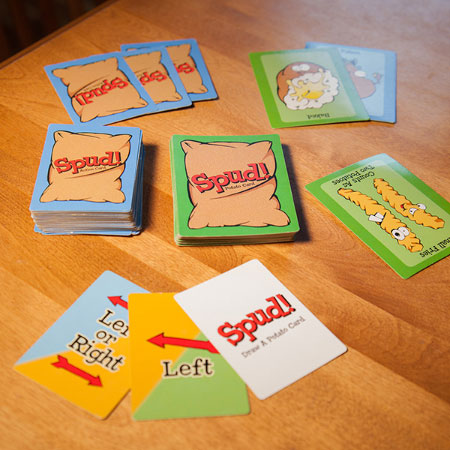 Some of you might shy away from a card game that comes in a burlap sack. If so, for shame. You would be missing out on Fat Brain Toy Company’s newest card game Spud!. This is one wild and silly game of hot potato! And not just hot potato, as Major Fun himself notes, but hhhhoooooooooooot potato! Hotter than hot. Forget-the-foil-and-roll-your-hands-in-asbestos hot. This game should not come in a burlap sack but rather its own reaction chamber.

Action Cards tell you where you can pass the Potato Cards: to the right, to the left, two right, two left, back at you, anyone, etc… There are also 14 Spud! cards. When  a Spud! Card is revealed, the player draws a Potato Card and gives it to one of the other suckers… er… players. This is how the game starts and is also how new potatoes are circulated when no one can move any of the earlier Potato Cards. Many Potato Cards can be in play at one time, and this leads to some of the best, most chaotic moments, especially as several potatoes descend on one player.

Potato Cards add their own twists to the game. Some cards count as 2 potatoes and the Rotten Potato cannot be moved at all (ouch!) There are also some special Potato Cards that give instructions to the player that draws the card or to the entire group. Some require the player to draw 2 Potato Cards. Some let the player sneak an old potato back into play. Some tell all players to pass their Action Cards to the left or right.

Spud! is one of the few games that I have encountered where eliminating a player does not particularly diminish the fun of the game. The game is so fast and chaotic that those who have been eliminated will enjoy taking a breather to watch the mayhem. Mind you, it won’t be long. And if you don’t want to play elimination, it is easy enough to stop play when someone hits 5, keep track of how many potato cards each person accrued  and start over.

The game does a great job of taking the classic “hot potato” and ramping up the action until everyone is sweating and pounding the table and laughing because it’s all such Major Fun.

Like any good potato, Spud! does come in its own burlap sack. The Action Cards and Potato Cards are easily distinguishable from each other by their size and color. The rules fit comfortably on the front and back of a slim tri-fold insert. This economy of design makes Major Fun smile.