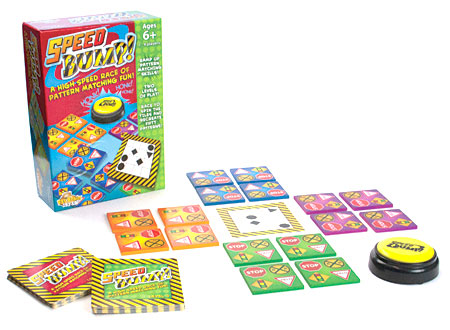 Speed Bump is what people who use words like that call a “pattern matching” game. We prefer to call it “fun.” “Major fun,” that is.

Each player (2-4) gets the same set of four, colorful, large, wooden tiles. There’s a deck of 50 Pattern Cards. These are the patterns that players try to match. As you can see in the picture, the patterns on the Pattern Cards are black shapes. And the tiles that you use to match the patterns are colorfully illustrated, which explains at least part of the challenge (and fun) of the game.

Each tile shows the same four traffic signs in the same position. The Pattern Cards show all four tiles. All you have to do is be the first to orient all four of your tiles so that the signs on the tiles are in the same position as shown on the Pattern Card – and be the first to hit the electronic Speed Bump buzzer. Actually, the Speed Bump buzzer doesn’t buzz. It honks a car horn and then says “Speed Bump” in a fun, somewhat bumpy truck-driving accent.

The rules suggest that if someone makes a mistake, they are out for the rest of the round. Though the rounds are short, we’d recommend that they just team up with another player.

There are two different kinds of Pattern Cards, and two different sides for the tiles, resulting in two different levels of challenge, effectively doubling the play vale of the game. The advanced level is called “All Terrain.” Here, the Pattern Cards are less abstract, but illustrate only some of the features shown on the tiles. You not only have to orient your tiles correctly, but you may also have to reorganize them to complete the match.

You can further raise the challenge level by shuffling both kinds of pattern cards together, players having to flip their tiles over when a different level Pattern Card appears.

The rounds are, as you can imagine, very fast – maybe a minute or two. The winner keeps the Pattern Card. The first player to gather five Pattern Cards wins the game.

Speed Bump is recommended for 1-4 players who are at least 6-years-old. We couldn’t figure out how the one-player version would work, so we’re going to recommend it for 2-4 players. Original game concept by Oswald Greene, Jr., FunBox Games LLC, elegantly produced by Fat Brain Toys, of similar LLCness.