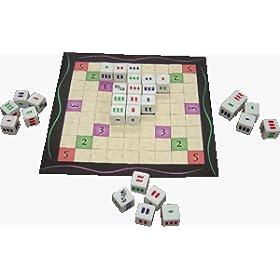 You, of course, know the game Set, from, as a matter of fact, Set Enterprises – the card game where you race to find “sets” of three cards. The cards show 3 different kinds of shapes, in 3 different colors, in 3 different shadings, in 3 different numbers. A set, then, is 3 cards, in which the attributes are the same, or all different. You can read all the rules here. Set has become such a successful game that its puzzles are even carried in the New York Times.

Now, however, there’s Set Cubed. Instead of cards, there are dice (hence “cubed”), a lot of dice, 42 of them. Instead of racing to be the first to identify a set, you take turns placing the dice on a board, using yours with those that are already on the board to complete a new Set, as defined by the above cited Set-making rules.

This turns out to be a very different experience than that of the card game, socially and intellectually. You take turns. On your turn, everyone else is quiet. Nobody’s yelling out anything. You can think. You can contemplate, even. Which is good, because there’s also more to contemplate. Like, for example, the growing cluster of connected Sets, each die played opening up the possibility for yet another Set to be built. And the bonus squares that add much-relished points if you can only use them. And the purported possibility of creating two Sets at the same time, even.