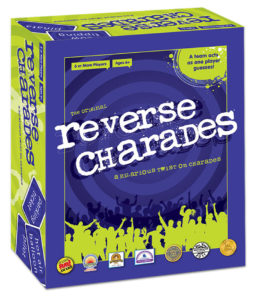 Small variations can have big, and often unexpected, consequences. Some patterns, when repeated across various scales and intervals, produce surprising results. Seemingly simple equations can produce strange and unpredictable fractal images as results are graphed onto two and three dimensions. This is one of the central tenants of chaos theory, that branch of mathematics that brought us the globular Mandelbrot Set. It’s also an idea that is warmly embraced by Major Fun.

Let’s flash back to the words of General Fun (ret.):

Reverse Charades demonstrates the kind of reversal that we most like to see in games. In your traditional, non-reverse charades, one player has to do all the performing, all alone. This puts anyone even remotely shy or self-conscious in a potentially embarrassing position, and, sadly, some people find that person’s discomfort emblematic of the fun of non-reverse charades.  In Reverse Charades, no one is embarrassed, because everyone is acting silly together. And yes, there is a certain chaos. And yes, it’s the very kind of chaos [that] makes the fun major.

And once people start playing charades in this manner, they don’t tend to go back. The team aspect of the game pulls almost everyone in. And there is little if any dead time. In traditional charades a single actor could get stuck if he or she is unfamiliar with the topic. This leads to that awkward exchange in which the actor shrugs and giggles while the team of guessers stares blankly as they wait for some kind of clue. With a team of actors, SOMEONE has an idea and once that person gets going, everyone else can find something to add.

It also becomes obvious that the laughs generated by charades are multiplied in Reverse Charades. You think one person acting out “banana split” is funny in charades? Watch 4 or 5 or 6 people do it here. My favorite one, hands down, the one that still makes me chuckle right now (months after the fact) is “urinal.” One person acting it out is funny but 5 people acting out a men’s room complete with dividers is forever seared into my ventromedial frontal lobe.

Reverse Charades has achieved Keeper! status not just because it is a clever twist on an already popular party game. It is clever. It is also elegantly and beautifully packaged. It comes supported by a great website AND there are handy apps for your mobile devices that let you take the joy of Reverse Charades anywhere those ubiquitous little devices can go. But more than anything, you’ll just want this game to go with you. It’s Major Fun and once you have it, you won’t willingly give it up. Your friends can play at your house or they can ask you nicely to bring it over, but it’s not leaving your sight.

6 or more players of any age. Seriously. Any age. If they can’t talk, then you can use them as a prop.