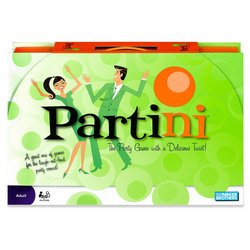 If variety were the spice of fun, Hasbro‘s Partini would be the paprika of play. Or maybe the garam masala of games.

Partini is a collection of 6 different party games. The key words here are “different” and “party games.” For example, there’s “Clay Smoothie” – a familiar party game, like Pictionary, only with something like Play Doh (oddly enough, all products of Hasbro), except your team has to figure out two out of three of your sculptures, all of which share a common (announced) property (e.g. “green”). And then there’s Mime Twist, a charades-like game, similar to the “Star Performer” games in Cranium, which, perhaps not-so-coincidentally, is also manufactured by Hasbro. And then there’s Hum Punch, in which, like in Cranium’s Humdinger, the object is to get your team to identify the song you are humming. But then there are also the non-Cranium gamelets, Shooters (which turned out to be one of our favorites) – a game involving cups and balls and small variety of cup-and-ball-based challenges, and What Nots in which you try to describe something by saying what it isn’t, and Straight-Up – a most party-like “familiarity” game in which players write something true or funny about a team mate (we were worried about this, because this is a game of an ilk that requires a certain amount of sensitivity – which can not always be counted on – yet the game proved well-enough structured to keep things safe, fun and funny). And, totally unlike Cranium, there’s no board – just a bunch of coaster-like disks which determine what game you are to play, and act as score counters.

Hasbro has gone to great lengths to make this Partini as attractive as it is fun to play. It comes in a large, sturdy, suitcase-like box. There are 500 game cards – all well-made and attractively-illustrated; cups and balls, pencils and paper, and a special Straight-Up die. Designer Chris Nelson has made praiseworthy efforts to make the game fun, unpredictable, and elegant. The coaster scoring- and game-selection mechanic works brilliantly. The balance of games keeps everyone involved. Familiar enough to be easy to learn (especially for Cranium players). Different enough to be an valuable addition to any party for involving 4 or more adult-aged, but not too adult-like people.

One thought on “Partini”