There’s a place in Indiana called the Prairie Wind Toy Company. It’s run by two craftsmen, a father and son, who devote their lives to sharing the folk art and joy of Whirligigs, Limberjacks, Hooey Sticks and dulcimers, too.

So we drove out with two of the grands to meet Charlie Alm (who’s still making folk toys and mandolins at 91) and his son Dave to see history in action. These two dedicated, generous, unassuming souls personify the spirit that keeps these toys alive: playfulness, craftsmanship, and devotion. 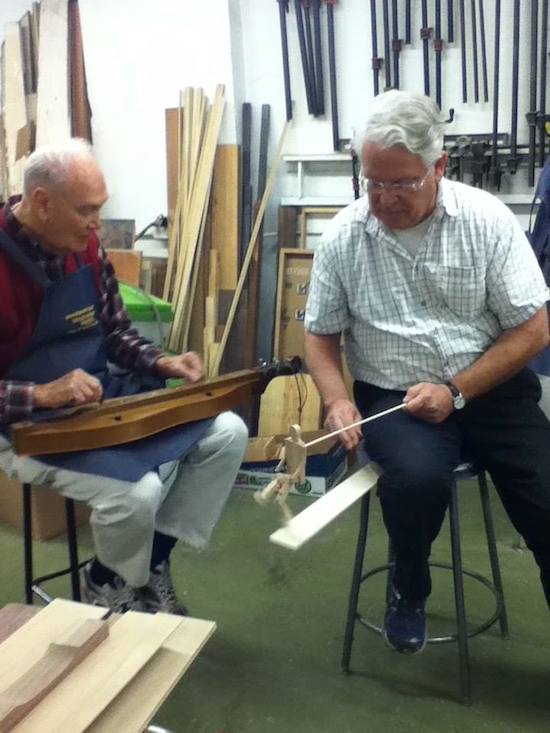 Charlie and Dave Alm in their workshop, demonstrating their Limberjack and dulcimer for us.

And here they are at play.

The Limberjack is an amazing little toy. It’s as much a musical instrument as it is a puppet.

And then there’s the Hooey Stick, a.k.a. the Gee Haw Whimmy Diddle. And here’s Charlie demonstrating its mysteries.

There’s a trick to it, and it will amaze you. It’s a trick that has amazed people for hundreds of years. And once you learn the trick, you can take your part in a generation-spanning heritage of amazement and delight. All due to the persistently playful dedication of people like Charlie and Dave Alm, passing their heritage of simple joy and wonder to the next generation.

Charlie and Dave with our grandson, Cole

One thought on “Limberjacks and Hooey Sticks”