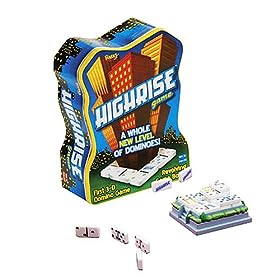 You know how every now and then you come across this beautifully packaged set of dominoes, sometimes in a tin, even, and the dominoes are in deed very nice – hefty, colorful, smooth – and sometimes there’s even some kind of lovely plastic thing that sits in the center of the table or some place, and keeps score or turns around or even makes noise – and yet it’s still dominoes? You know what I mean. Dominoes, in a nice package, but it feels like dominoes, and it looks like dominoes, and it plays just like dominoes. And you can’t help feeling just a little disappointed, just a little like you were hoping maybe for a really different game, something new, something that maybe used dominoes, but was more interesting, more challenging, more, well, different?

Despair no more, my playful friend. For Highrise Dominoes is in deed a wonderfully different game. And the base that is included in the lovely tin is really functional, really central to the game.

The object is to build a tower of dominoes. First, a basement is built – 8 dominoes placed, face-up, in the bottom of the turntable base. From then on, players take turn building on to the base, the rule being that the domino has to match the numbers it rests on. And yes, you can lay your domino so that it rests on two different dominoes. And once that domino is laid, you can lay another domino on top of that. And the higher the level, the higher the score.

It’s a completely different experience of dominoes. There’s so much to look at. Which is why you’re so happy that the turntable turns.

There are also wild dominoes, there’s a double, with both halves wild. And there are others with only one wild half. But, boy, do you get to love those wild ones! Seeing as they are often the only ones that you can play. Which you really want to do. Because the first player to use all her tiles can get many, many points.