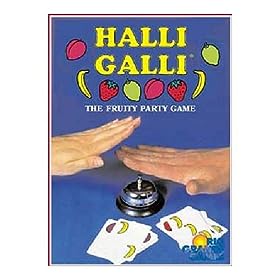 Halli Galli is probably the fastest, easiest to learn, slap your hand down first kind of slap jack-like card game with a bell good enough for a concierge, in the world. And it’s got that added, slightly arithmo-perceptuo challenge that makes you have to stop, look and count, and it’s that very slight challenge that makes Halli Galli Major, I kid you not, FUN.

The hotel-worthy bell adds yet another je ne c’est qua to the mise en scene, as it were, so to speak. It’s loud. Pleasantly, reveberationingly bell-like in tone. But loud. And the bell-dinger is, like the bell, made of metal, and it’s small and round, and slapping it can honestly hurt. Especially when it’s your hand, and you’re a kid, and your father’s very manlike hand is on top of yours in a nano-slap. And yet, it’s a remarkably kid-worthy, and grown-up party-worthy game. Just, perhaps, not family-worthy, just because of the noise and sheer excitement and pain-potential of it all.

You get a deck of 56 cards. The cards have pictures of fruit on them. You know, fruit, like apples and bananas. Only some cards have like three apples on them and some have just one banana and some have two apples and a strawberry, too. You deal out all the cards. Everybody, at the same time, reveals their top card. If there happen to be, between all the players, exactly five of any fruit (I did say exactly), the first person to ring the bell wins all the face-up cards. And so you go, simulflipping, looking for exactly 5 of exactly the same, flipping again, more and more cards being added to the discard piles with every flip.

From AMIGO Spiel & Freizeit GmbH, and made available in the US by Rio Grande Games, Halli Galli can be played by 2-6 players, the more the crazier. You can play it with kids as young as six and with adults of all phases. It takes maybe 5 minutes to learn and 15 minutes to play a single round. And you will play many rounds.