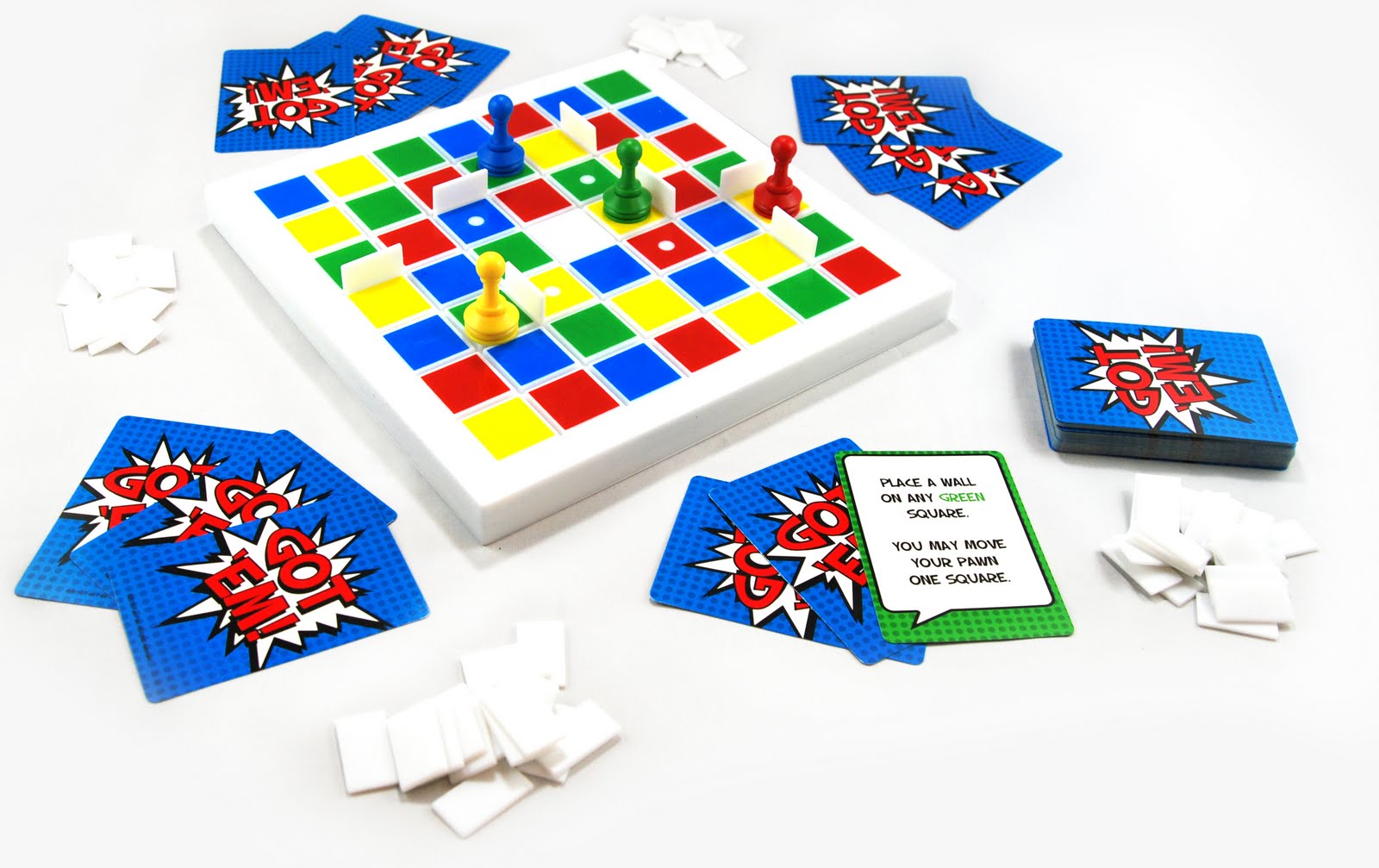 As I’ve written before, the best strategy games (in terms of fun) arise from simple, elegant rules and game mechanics. Games of this sort provide an accessible portal into a contest that requires the players to make short term and long term plans based on…

Sorry about that. Got some verbosity lodged in my keyboard. Major Fun games like Got ‘Em! are easy to learn and you wanna play ‘em again and again and again.

This one is even reversible!! (I’ll come back to this in a second)

The basic premise is simple. Each player has a pawn on a seven by seven grid. On a turn, each player moves his or her pawn and places a plastic section of wall. Walls prevent movement in that direction. A player is eliminated if his or her pawn is ever surrounded by walls.

I mentioned the game is reversible, right? I meant reversible in the sense that some jackets are reversible. The board has two sides and each side has a distinct flavor of play and slight variations on the basic rules. One side is for the Bright Rules and the other side is for the Brainy Rules.

Bright Rules involves some random elements and utilizes a deck of 55 cards. The grid of squares on the game board is divided into four colors: red, green, yellow, and blue. Opponents still move their pieces and place walls, but their movement and wall-placement are dictated by the cards. Each player is dealt three cards. Each card has instructions for how to move your pawn and how to place a wall. For example: “move up to 2 spaces and place a wall on any GREEN square.” Not only must players work to avoid being boxed in, but they must also decide what cards will be most useful in later stages of the game.

Brainy Rules does away with the cards and the colorful grid. Players move their pieces and then may place one piece of wall anywhere on the board. Movement is based on the number of walls that currently enfold a player. Each pawn can move one space, but if your pawn is on a square that has a wall touching it, you can move your piece an extra space for each piece of wall. In some cases it is to your advantage to place a wall next to your own square. Doing so gives you one extra space of movement. That can mean the difference between scurrying frantically at the whim of your opponents and breaking into a clear space so that you can take the time to push your opponents around.

It is amazing how quickly the board fills with walls. What seems like a wide-open field of play turns into a series of dead-ends and shrinking courtyards. Especially with 4 players. Who knew that claustrophobia could be Major Fun?

Calliope has done a wonderful job of packaging the game, designing the pieces, and conveying both sets of rules. I appreciated the way each set of rules (complete with illustrations and hints) had its own tab on an ingeniously folded sheet of instructions.

Not since enacting Poe’s “Cask of Amontillado” in middle school have I had this much fun walling someone in. Well, there was also “The Black Cat.” And “The Fall of the House of Usher.” And “Buried Alive.”  Come to think of it, I remember having more students in that class at the beginning of the unit on Poe…