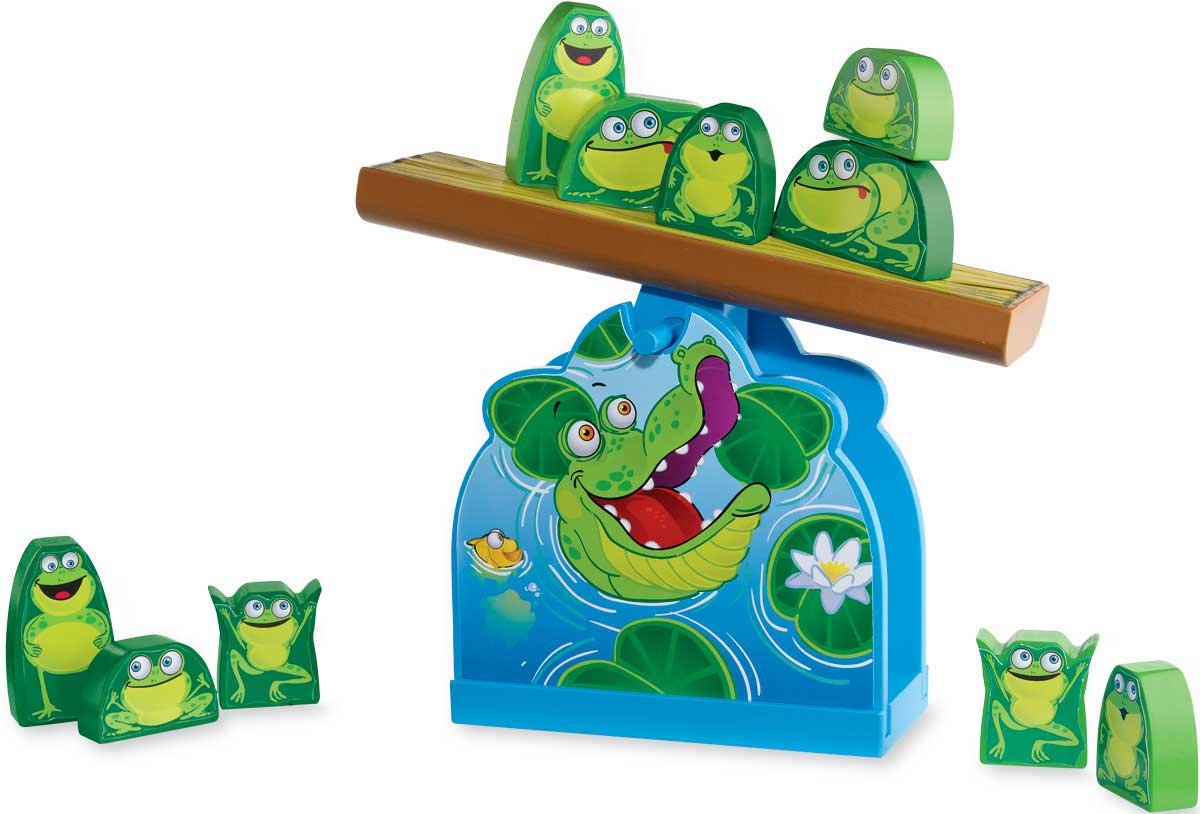 Frog Wobble is designed to be a children’s toy, which perhaps explains why it looks so much like something children might play with: cute frogs, sitting on a wood plank, over a pond with a fishy and a suspiciously friendly alligator. It’s a hefty, wooden toy, designed to withstand repeated, prolonged enthusiasm.

There’s a wooden frog plank, varnished for extra slipperiness and general woodiness. It is glued to a large, weighty weight that both adds to and detracts from the stability of the frog plank. There’s a hole in the weighty weight, through which one slides a wooden dowel. There’s a wooden board, a.k.a. a “pond stand,” with grooves on either side. These grooves accommodate two wooden “pond stands” which, once placed appropriately into the pond stand grooves, become the dowel-holder. Thus, we end up with a colorful, sturdy, yet easily unbalanced wooden thing upon which to put our eight wooden frogs.

Speaking of wooden frogs, there are two sets of four of them. One set is lighter in color than the other, but, otherwise, identical. The four frogs are each different – different sizes, different shapes. The frogs are designed so that they can, should one so desire, be balanced upon each other.

The rules suggest two different modes of play: cooperative (each of the two players plays simultaneously, balancing the frog of their choice on the position of their choice, the goal being for all the frogs to be sitting or lying on the plank. There’s a competitive variation which needs little if any further explanation. They also note that the frogs can be slid, stood up on each other, or even be placed flat on their backs or tummies.

When the plank tilts sufficiently, the frogs all slide off. If you’re not playing in a carpeted area, the frogs fall with a child-enthusing  woody clatter.

The rules further suggest that you can add more “small objects” if you so desire.

It is brought to us by MindWare who recommends this toy for children, three-years old and up. I am 72. I suppose one would consider that “way up.” I played with my grandson. It was way fun.