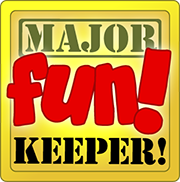 When I was holding game tastings in Redondo Beach, chief Taster and good friend Marc Gilutin and I were talking about what we should call games that were even more Major Fun than the games we called Major Fun. He suggested “keeper,” and that seemed like such a perfect description for those really special games. Keeper.

Some are also toys. A few are game you play on an iPad or -Pod or -Phone or maybe on a computer. Those, the computer games, you tend not to hold on to as long or play quite so often because most of them are harder to change, harder to adapt to the changing moods and modes of you and the people you love playing with. Because you play from different places, different times.

We, my wife and I, have a few games that we think of as Keepers. Only a few. Currently, the only computer games we seem to be playing together are solitaire and Draw Something. We like to help each other find answers, we share the funny. Also, most of our Keepers are tile games: Bananagrams, Qwirkle, Rummi-Cube. There’s something so flexible about these games. Not just the pieces and configurations, but the rules. Maybe because there are so few rules. And we don’t usually keep score. We more often just take turns appreciating each other’s brilliance.

There are other games that we play from time to time, just for variety. Some dice games, some more word games. We hold on to them, so they’re what we might call “Keepers-in-Waiting.” Some Keepers we keep for company. Word on the Street and Reverse Charades, for example.

A Keeper is some kind of game or toy or plaything or -place that keeps you together with the people who keep you together. May you find a lot of them.