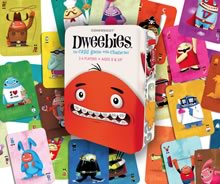 Q: What do you call the kind of card game that is easy to learn and play, that has just enough luck to keep you from taking winning or losing too seriously and just enough strategy to make you think that you are doing something clever, that uses a lot of very silly drawings, that takes maybe 15 minutes to play while making you want to play again and again, and comes in a tin box?

Dweebies is another gently fun family game from Gamewright. Well made, cleverly packaged, attractively illustrated. Designed by Tim Roediger with artwork by Christopher Lee, Dweebies is just different enough to become a treasured family game. It can be played by kids 8 and older (and that means you), and is as much fun with 2 players as it is with 6.

You get 54 cards, with 27 different kinds of Dweebies. O, you might say to yourself, I get it. There are two of each kind of Dweebie. But there you’d be wrong. Some Dweebies have no peers, while others are twins, triplets, even quadruplets. All contributing to the mild, but engaging strategic interest of the game. The quantity of siiblinghood is represented by the number of dots appearing in the corners of each card

Players each get 5 cards. From then on, they take turns placing one of their cards on the table, adjacent to a card that is already played. If it just so happens that the card at the end of the row or column of the card you just placed is a match, you get to take those two cards and all the cards between. You might think that, when given the choice, it’s better to play a card with the fewest siblings. Or not.

From time to time, the player who takes a row of cards causes the array to be split in two parts. The next player must join those clusters if it all possible. Which can certainly upset one’s plans to act strategically, and at the same time lend a certain amount of strategic oomph for the player who manages to create the separation.

So, what you have is a card game not quite like any card game you’ve played before. A gently fun game, in the course of the which everybody usually wins something. Unavoidably, however, someone will win the most. It definitely pays to be observant, and mild strategic pondering can prove advantageous. Though this gives the game a somewhat competitive flavor, there’s more than enough sheer luck to keep players from getting too serious about their success or lack thereof. And the very silly Dweebies help to remind everyone that the real goal of the game is the fun of playing together.