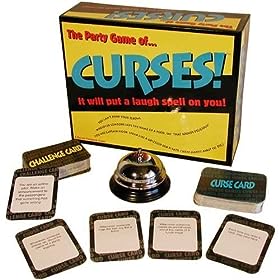 We last discussed Curses on, to be needlessly precise, October 2, 2002. We, in fact, gave it a Keeper award, no less. The highest ranked, most Major award we have.

Recently, Curses has been “refreshed.” Same package, same art, same basic gameplay as in the original Brian Tinsman design. The bell is maybe a little more modern-looking. The cards a little easier to shuffle. And some of the curses and challenges are new, and, of course, funny. But all in all the game isn’t any more commercial-looking than it was then. Simple text graphics. Two decks of cards. A bell. And yet, it’s as much of a Keeper now as it was then.

Because we’re still playing it.

What we learn from all this, is that the Major FUN Awards, and especially the Keeper award, represent games that are unforgettably fun.

The original review is the same review I’d be writing for the game today. It follows:

Curses – a game of geometrically increasing silliness for 3-6 players, age 9 and up.

There are two decks of cards and a very nice hotel-type hit-the-top-and-it-rings bell. One deck of cards is called “Challenges,” the other “Curses.”

Let’s start with the “Curses,” which, of course, are the real challenges. A Curse is something silly that you have to do. For example, you might have the Curse of having to talk in a French accent, or having your wrists glued to your head (well, there’s no real glue, but you have to pretend there is), or having to bow every time someone applauds. As the game progresses, you get more Curses. From other players, actually. Remembering two Curses is at least twice as difficult as remembering one. By the time you have three Curses you are at a conceptual point likened only to patting your tummy and rubbing your head while singing “Boat your row, row, row.” In a French accent.

When you break a Curse, some observant player dutifully rings the bell. If you break enough Curses, you’re kind of out. Kind of, because you still get to be a bell-ringer and cause of Curse-breaking.

The Challenges make the Curses evermore Curselike. You might have to ask someone else out to a school prom, or be in a TV commercial explaining why your deodorant is best or demonstrate how you celebrated your what you did when you scored the winning touchdown in the Superbowl. Each challenge takes on a very different light when you have to perform it under multiple Curses.

Curses radiates at least 120 Gigglewatts of pure Guffaw-power. It’s can get very, very difficult to play, very quickly, and is challenging enough to occupy the most limber-minded of collegiates, whilst silly enough to keep even us over-the-hillsies laughing and coughing in glee.

The cards on the refreshed version pass the shuffle-test quite nicely. Their graphic design could make it a little easier to distinguish between the two kinds of cards. But that, compared to the sheer hysteria that this game catalyzes, is clearly, at most, a nano-niggle.