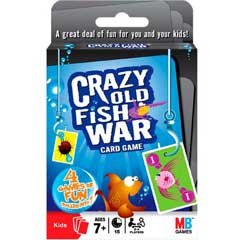 You know those card games kids play, like Crazy Eights, and Old Maid and Go Fish and War? Remember how much fun they were? And how they kind of stopped being so much fun after a while, and you kind of stopped playing them? So, let me ask you, do you think you might find those games fun again if you combined all of them, yes, all of them together into one?

You deal seven cards out to everybody (up to six players) and put the rest face-down in a pile. Then you turn over the top card, and the next player, Crazy Eight-style, plays a card that matches either the color or the number of the card just played. And so forth and so on, until a player doesn’t have a match, at which time that player may play the eight-tentacled Crazy Octopus card, which looks and is wild, and can, also Octopus-like, be any color. Or the player can choose to Go Fishing, hoping to find a match in someone else’s hand, or the player can declare a War against any other War-like player. Should that other player have a higher card, or an Old Mermaid, she wins the war. If need is dire enough, and it’s your turn to lead, and you don’t have a match, and you don’t want to declare a War or Go Fishing, you can play an Old Mermaid, who, as we know, is also wild, but who makes the player have to pick up five more cards.

All of which results in a new, yet hauntingly familiar game, that oft-times leads kids who are old enough to have grown bored with War to engage in long, friendly bouts of rule clarification, and more oft-times into longer bouts of laughter.