Block Builders is a puzzle composed of six plastic cubes, each of which is hinged in a different way; and a set of 50 puzzle cards of three different levels of difficulty. Each card looks like something an architect would draw – on graph paper, even. You see the shape you’re supposed to make out of some or all of the blocks. You can also see how many blocks you’re supposed to use and how difficult the puzzle is supposed to be. You just can’t tell which blocks to use. (That information is clearly depicted on the reverse side of the card, but you’re really not supposed to look at that side until you’ve solved the puzzle yourself, or given up.) 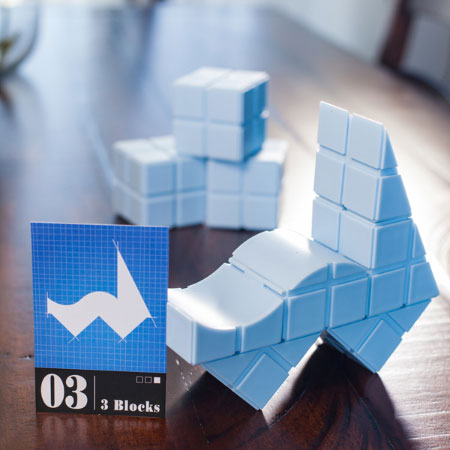 Simple enough, eh? Six separate blocks. Each hinged a different way. You’d think it’d be child’s play. And according to the designer, it is child’s play (if that’s what they mean by “Ages 5+”.) All I can tell you is that it took this seventy-one-and-a-half-year-old child twenty minutes to solve the first puzzle. And I cheated.

But I immediately forgave myself, because: that’s the kind of guy I am (forgiving), and that’s really the best way to understand how the puzzle works. It’s not exactly intuitive, making the connection between the architectural drawing and the blocks you hold in your hand. It’s often not even remotely intuitive, imagining how blocks that are each made of  two hinged shapes might fit together. So a little cheating, at first, goes a long way. And as you progress through the puzzles, the more fascinating it becomes and the greater respect you have for the ingenuity and complexity of the whole system.

The blocks are about 2.25″ square – each enough to fill your hand. They unfold in unexpected ways, so you can understand how even a 5-year-old would want to play with them.

I know this has nothing to do with the fun of the puzzle itself, but the puzzle comes in a large cube. And to open the puzzle, you unfold it, just the way you’d unfold one of the puzzle cubes. It’s a touch that demonstrates how much the designers at Fat Brain Toys respect their products, and people who buy them.