You remember me writing you about Office Playground? It was in that article on Toy Therapy for Business Meetings, in case you forgot.

I went to them for an update on their current meeting-appropriate toy offerings, and wound up with what I’d like to think of as “a basket full of squishies.” Like to think, because I only got four, and the basket’s too big, anyhow. Anyhow, as I was saying, think of these as a representative four, a mere sample of the varieties of “squish” (or whatever you call that really stretchable, baby-poweder-covered stuff they’re made of and their meanings.

Let us begin therefore with the Spaghetti Ball 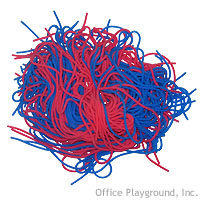 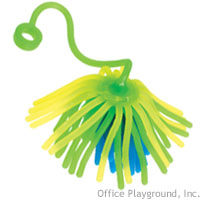 Stretchin’ Squid Yo Yo.

My wife, when she first saw the Stretchin’ Squid Yo Yo – with its convenient finger-ring-ended highly stretchable, well, tentacle, with which, should you so desire, you can perform yo-yo-like activities – proceded to demonstrate the verisimilitude, showing me how she could Rock the Cradle, Shoot the Moon, Walk the Dog, and make me writhe with laughter.

Then there’s this squishy frisbee-thing,

the Stretch Flyer, which does in deed flatten and fly frisbee-like into the beyond, and also fits over your head. Thus, should a great deal of shared spunkiness be manifest, it can easily serve as an invitation to a game of frisbee catch, or golf, or basketball, or dodgeball, for that matter – a dodgeball that doesn’t hurt. Or, as previously noted, you can put it over your head, which, at times, is exactly what you need to be able to do. 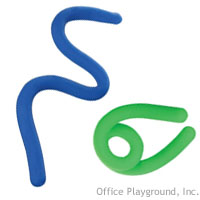 Stretchy String, also made of the basic squishy material, but thicker, and hence, stretchier, and further hence, can be snapped at things and people as well as whirled menacingly and at extensive distance. Of course, it doesn’t really hurt when it hits you, but it sure looks like it will. As it does when someone snaps it at you.

Note, if you will, how each of these lends itself to a range of play, from sensual and contemplative, to downright hostile and aggressive. Note, further, how, though each is in deed a tension reliever, some seem to lend themselves more to relieving social tension than personal.