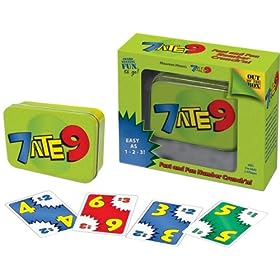 7 ate 9 may be the traditional explanation for 6’s profound fear of 7, but it most definitely doesn’t explain why it is such a fun family game. The responsibility for this welcome transformation lies squarely on the shoulders of designer Maureen Hiron, the art of Cathleen Quinn-Kinney and John Kovalic, and the acumen of the once again inspiringly playful folk of Out of the Box.

7 ate 9 is a card game of speed and calculation, similar to Spit, but significantly more excruciating – in a good way. A very good way.

Two to four players begin the game by taking the top card from the shuffled deck, placing it face-up in the center, and then distributing the rest of the deck evenly between players. Since there are 73 cards, after the first card is played on the table, the rest divide into satisfyingly even piles whether you’re playing with 2, 3 or 4 players.

The cards are numbered from 1-10. In addition (or subtraction), each card also has a number, from 1-3, in the corner. That number is added or subtracted, at the player’s discretion, from the main number, which determines what number card can be played next. So, if the top card is a 7 and the small number is a 2, the next card can be either a 5 (7-2) or a 9 (7+2).

No turns are taken. Players simply draw cards from their face down pile, one at a time, if they can play a card, they announce the number and place it on top of the center pile, if not, they draw another card until they have found a playable card or someone else has. In the latter event, they must now look for a new match. The first player to get rid of all but one of her cards wins.

So it’s like Spit – players playing simultaneously, as quickly as possible, trying everso assiduously to be the first to find the next playable card. And yet, it’s not quite Spit. Not with there only being one pile, and the challenge of having to add or subtract in order to calculate what card is actually the next match. And then, say, you throw a 9, with a plus or minus, say, 2. Well, if you subtract 2, it’s simple enough – you can match it with a 7. But if you don’t have a 7, and you’re fast enough, you can add the 2, which, arithmetically, would make 11, which is patently absurd since the highest card is a 10. If not for the “round the corner” rule, by which you can legitimately play a 1 (which, in a circular sequence, would be the next card). Similarly, if a 2, for example, is played, a 2 with a plus-or-minus 3, shall we say, you can play either a 4 or a 9. This logical bit of round-the-cornerness is wonderfully exasperating, making you have to think generally when you are least ready to.

Yes, yes, people will tell you that it’s an educational game because it uses numbers and arithmetical operations, and yes, children who are weak in these particular skills will most definitely find themselves hovering on the other side of exasperation. But no matter how good you are with numbers, and how mature and experienced you are in the ways of life and games, you can easily find yourself succumbing to the speed and flexibility of an 8-year-old opponent. Yes, there is a modicum of luck involved – just the modicum needed to keep hope alive, keep the game fun, and make you want to play again and again.