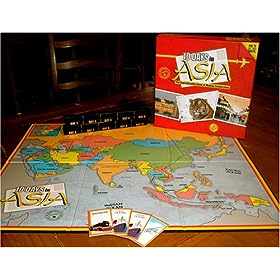 I began my world travels years ago, where I spent 10 thrill-filled days in Africa, and I recall, even now, remarking at how remarkable it all was, how much fun we were having learning about where Africa has all its countries. Even though that wasn’t really the point of the game, as much as the delicious dialog between luck and logic that this game, like all good card games, seems to be all about.

It’s a card game, really – a tile game, even, for 2-4 players, maybe 9 to certainly adult. Not a board game at all even though you spend a lot of time looking at the board. You never really play on the board. You play on card holders, two of them, actually, one numbered 1-5, the other 6-10. You pick a card and place it into any slot in your card holder. And then another, and then other. Planning, all the while, to place each card so that when all ten are assembled onto your card holders, they will be in the right order, each country card leading to another, geographically adjacent country card, unless it’s a boat card and the boat card is the same color as the ocean you share with that country card, and even, after that, if you get another country card of a country that happens to be on the same ocean, then you can probably take the train to that country, which is, in turn, a non-stop plane-ride away from Vladivostok, as the saying goes.

But, of course, it never goes that way, and you wind up having to discard and pick and replace and let me tell you the planning, the heights and clarity of logic one can manifest, only to be felled by something as stupid as luck, argh, it’s enough to make you have fun. Sizable fun. Major FUN.

Anyhow, that was then. And that was Africa. There’s been USA and Europe. And now there’s Asia. And what does that mean? It means it’s a whole new game, one that you know how to play, but with O so many, many Asian countries. And the board, isn’t it subtly, and everso welcomely larger? And what about trains? Isn’t this the first of the 10 Day series to have trains? But it’s another 10 Days game, all right. You’re on a trek as fun as your Africa ever was, or USA or Europe, even, but in yet another part of the world called “Asia,” with so many Asian-sounding countries to learn about, and with such a fun way to do it, while you’re having so much fun playing, thanks to the cleverly globe-spanning people who made these trips possible.